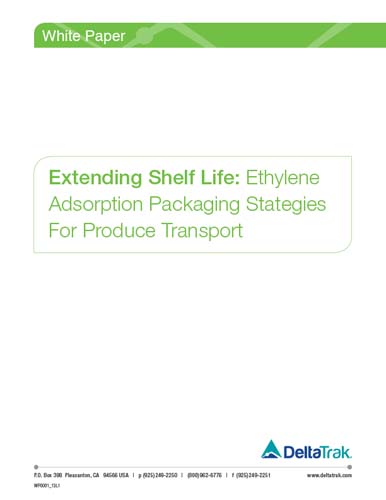 Historically how to preserve and store food for consumption when there might be a food shortage has given birth to such packaging innovations as using glass, wooden barrels and cans to protect and later transport food. The invention of the cardboard box at the end of the 19th century and the invention and discovery of plastic and polyethylene in the 1920s and1930s opened up a new era in protecting and transporting foods. The ongoing drive to find new technologies for preserving and transporting food has changed our lives significantly from one where we consumed what was available nearby to a world where out-of-season or exotic foods can be found year round at any neighborhood market. Growers, packers, distributors and retailers of food are challenged on a daily basis to find the most efficient ways to conserve our food resources and minimize loss.

Extending shelf life, or the period of time which product can be stored and remain suitable for consumption, is a top concern to produce growers and handlers particularly in today's changing food supply industry. Today's top drivers for the need to extend shelf life include the fact that food must travel further today than ever. This is a result of the marked increase in imports and exports, the transition to fewer and larger suppliers, and the proliferation of regional distribution centers where most supermarket goods are being routed through. Food must travel further today as a direct result of this lengthening of the food distribution chain. The food distribution chain has changed from the short grower to consumer chain to the more involved and time consuming grower to distributer to retailer and then finally to the consumer chain. Today consumers have access to produce that have different peak seasons depending on geographic location. Instead of limiting availability of the product to a set growing season we now have access to seasonal produce from multiple locales throughout the year. This contributes to extended transportation times. Another important driver is the cost associated with produce shrinkage or spoilage. According to the Produce Marketing Association the national retail average for produce shrink is approximately six percent. Factoring in that there are approximately thirty thousand stores in the United States, translates to about 2.1 billion dollars in loss. This monetary loss coupled with the lengthening of food transport is every food handling institution's motivation for considering new technologies that extend shelf live.

Factors that affect shelf life of produce include improper handling, inadequate humidity, temperature abuse and Ethylene exposure. Following is a look at what ethylene exposure is, how it affects produce, the challenges of dealing with ethylene exposure in produce, how food handlers have historically dealt with this problem and the new technologies available in packaging today to combat the problem.

Ethylene is a hormone produced by plants and released as a colorless, odorless gas which the plants use to regulate their own growth, flowering, and aging. Most fruits and vegetables also rely on ethylene for ripening. Injury and damage to plant cells, plus the natural process of maturation causes plants to increase ethylene production. It is an increasingly damaging cycle since the presence of more ethylene means hastening of decay. Ethylene is the trigger that can turn unripe produce into edible, saleable fruit.But it can also accelerate ripening and aging, causing shrinkage and loss of revenue due to unsellable produce.

Ethylene stimulates different aspects of plant functions. It increases cellular respiration, which in turn increases metabolic rate. After produce has been harvested this increase in respiration will shorten shelf life. Ethylene also causes plant cells to lose water, leading to dehydration, drying, and shriveling. It reduces many beneficial nutrients, such as Vitamin C, and also leads to loss of leaves and flowers on the plant, yellowing and spotting of leaves and fruit skins, and sprouting (such as in onions, for example). It also changes the taste and aroma of fruits and vegetables.

For the produce industry one of the most damaging effects of ethylene gas is the fact that it stimulates plant cells to increase their ethylene production, which accelerates all of these adverse affects associated with ripening, maturing, and decaying, and thus shortening the window of time for shipping, storage, and sale. Pallets of produce experiencing any extended period of shipment may arrive with damaged unsellable product. This is a growing concern for food handlers needing to remain competitive as the food distribution chain lengthens and costs of spoilage rise.

In the past food growers and handlers dealt with the issue of spoiling and ethylene exposure during transport either by simply accepting that a certain percentage of spoilage would happen, spending more for expedited shipping or using cold storage to deter the spoiling process. Of these only cold storage proves effective in delaying post-harvest deterioration however even in cold storage produce can still emit ethylene and continue the spoiling process. In fact according to a report from the International Centre for Advanced Mediterranean Argonomic Studies in some plants, such as cucumbers, cold temperatures can actually induce the production of ethylene. This report further states that temperature-induced changes in ethylene production can have a large impact on plant development such as evident in certain types of pears that actually require cold temperatures for ripening to occur. Another report from the University of California at Davis, one of the United State's top research universities, documents that kiwifruit requires only a very minute concentration of ethylene to start the flesh softening so long-term cold storage. Although cold storage is partially effective in hindering ethylene production it does not solve the challenge completely.

New packaging strategies have been developed to address the challenges of extending shelf life in transport. Modified Atmosphere Packaging or MAP as it is commonly known is a technology that attempts to manipulate the atmosphere surrounding the produce in order to delay spoilage.

There are different types of modified atmosphere. One method injects oxygen, carbon dioxide and nitrogen into pallet covers or containers in order to modify the air surrounding the fruits and vegetables. This gas mixture or gas flushed type of system requires that the air surrounding the product be removed and the desired gas mixture is then inserted. The exact concentration percentage of oxygen, carbon dioxide and nitrogen used is dependent on the type of food or produce is being transported. The mixture is dependent on the product, packaging material and storage temperature. The gas must be inserted into an airtight enclosure.

An alternate and less expensive method incorporates additives directly into plastic films used for covering pallets or lining boxes of produce. PrimePro EAP® or Ethylene Adsorption Packaging is a new technology that falls into this category of modified atmosphere packaging methods.

PrimePro EAP® pallet covers are more cost effective than using gas mixture or gas flushed MAP systems. The covers are extremely quick to apply, using only one or two employee as opposed to multiple employees required to cover, seal, and inject the gas into the cover of a gas MAP system. PrimePro EAP® covers install in seconds, do not require airtight seals around the bottom of the pallet and eliminate the extra cost and equipment associated with gas additives. Another key benefit is the ability for a shipper to ship a pallet of produce covered with PrimePro and be able to deliver individual cases along its route in multiple stops without having to worry about breaking the gas seal in a gas flushed packaging system. This feature allows shippers to deliver individual cases from a pallet without compromising the pallet cover's effectiveness. The film also contains an anti-fog additive to reduce the accumulation of condensation inside the package. This feature is also essential for shelf life extension because excess moisture causes decay.

With the daily challenges of conserving product and minimizing losses growers, packers, shippers and retailers of produce now have new packaging options that allow them to dramatically increase shelf life. Modified atmosphere packaging technologies can help food handlers remain competitive by reducing spoilage and delivering consistent quality product on every shipment. Low cost pallet covers with ethylene absorbing technology delivers higher quality product by minimizing the amount of ethylene present during transport and storage of fruits and vegetables. This technology protects produce quality without the need for expensive gas or gas equipment.

Empowering shippers and receivers with visibility into shipment location tracking

As the situation surrounding the COVID-19 virus continues to evolve, DeltaTrak Inc. is planning for an uninterrupted supply of those product and services we offer. As an essential provider to the Life Science, Food Safety, Agriculture and Transportation industries, we’re committed to taking the necessary steps to ensure our employee’s safety while maintaining a high level of operational capability.

As of today, DeltaTrak’s supply chain is fully operational, and for the majority of items, inventory levels remain at normal levels.

We encourage our customers to review their product requirements beyond their regular order patterns to buffer against circumstances beyond our control.

Should you require additional information regarding this matter, please contact me at the address listed below.